The Partnership Revolution in Annual Review of Social Partnerships 2015

This year's Annual Review of Social Partnerships, published by Greenleaf Publishing, is a 10th anniversary look back at the field of collaboration by business and other actors on matters of public good. The review includes reflections on my learning over the past 2 decades working in this field, in a paper called  "The Partnership Revolution." To download the review, register for free and download from Greenleaf Publishing. 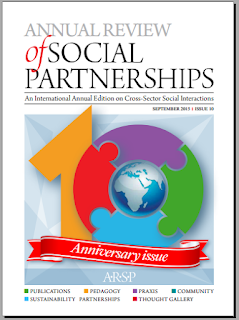 I'm also grateful for the committee of the ARSP naming me a thought leader in the field, amongst 28 others who are honoured for their contribution. The honorees include Professor James Austin (Harvard Uni), Professor Andrew Crane (Schulich), Professor Sonia Ospina (NYU), Professor Sandra Waddock (Boston Uni), and Professor Klaus Schwab (World Economic Forum). The full list and selection criteria are included in the ARSP.

I'd like to acknowledge Dr David Murphy, who started working with me 20 years ago, on our first book on the topic In The Company of Partners, in 1997. We collaborate once more, as he is the Deputy Director of IFLAS,

"The Partnership Revolution: Reviving the early spirit of innovation in cross-sector partnering"
in ARSP Issue 10, September 2015.

When asked to contribute to this issue of the ARSP, I first reflected on what it felt like when I began to work on cross sector partnerships 20 years ago, and what this approach could mean today. In early 1995, I'd finished my undergraduate dissertation on the WWF 1995 Group, which was a partnership of around 50 companies committed to sourcing only wood certified by the Forest Stewardship Council (FSC). This led me to work for WWF-UK to create a standardised supply chain audit and reporting system for the companies. After that I worked with WWF International to conceive the Marine Stewardship Council (MSC). I was enthused by these new approaches, and quickly wrote a book with David Murphy, called In the Company of Partners (Murphy & Bendell, 1997). I advised, created and analysed partnerships over the coming years, writing two further books on partnering (Bendell 2000; Bendell 2011).

Looking back, I remember that when I first started working on cross-sector partnerships, I did so, and many of the participants did so, because of a combination of personal perspectives that encouraged innovation. There was sufficient self-confidence to break some norms about what was expected of an NGO staff member or business person.  Now 20 years on, partnering is an established field of practice and research, as evidenced by the volume of literature covered in the ARSP. As so many NGOs and companies collaborate on projects, it may be difficult to realise how wacky this idea seemed to many 20 years ago. However, this original spirit of creative, audacious innovation from 1995 has waned and partnerships have become a more conservative field which I fear could go stale and lose its relevance in the future.

Although innovative at first, the field of cross-sector partnering always had the ingredients for becoming a conservative field – given the focus on large organisations and often involving efforts to create new governance bodies. As practitioners in civil society, in the mid-1990s we focused on big business, seeing their influence through their supply chains and consumer reach, and their apparent vulnerability to brand-bashing campaigns. As business people, and advisers to business, we focused on large NGOs with famous brands, which could help persuade our colleagues, suppliers, customers and others that we were serious about our sustainability commitment. Therefore most of the partnering involved larger so-called “incumbent” organisations. The new initiatives we created as novel experiments with a hope of prefiguring a more participative form of international governance also then evolved to become large incumbent organisations. For instance, the two I was involved with, the FSC and MSC, became major multi-million dollar organisations influencing significant market segments. That was the plan, after all. The result of this convergence of large organisations is that the partnering agenda that emerged was a largely conservative one. Partnerships were not fundamentally challenging and transforming the underlying dynamics that might cause the social and environmental problems being addressed.

By the late Noughties, as limitations of market mechanisms for driving change towards achieving the public goals of sustainability became increasingly apparent, more focus was placed on how these partnerships could generate systemic changes, via influencing whole sectors, investors, and regulations. Therefore I thought it the right time to frame this insight with my practitioner-focused book Evolving Partnerships (Bendell, 2011). I mentioned that supporting innovation can be one type of 'third generation partnership' aimed at systemic change, still focusing on large organisations as the key protagonists.

But what I did not look at, nor found in mainstream management literature or in conversations with practitioners, was the question of whether partners were the most useful actors or partnerships the most useful arrangements for systems-oriented change efforts. I had a lot invested, emotionally and professionally, in the idea that partnerships could deliver meaningful change in the context of the scale and urgency of the challenges faced. Was I at risk of becoming 'incumbent'? As specialist academics, are we all at risk of that?

Integrating doubts or new insights into one's professional work can take time. In my case, 2008 was a personal turning point, but it took three years to integrate this into my professional activities. One instigator of this personal 'crisis' was the Western financial crisis, which meant that I could no longer ignore the deeper questions about the design of capitalism – no longer seriously hold the view that it is something to address at some point in the future. Rather, attempts to shift economic systems at their root was something to more actively consider, pursue and analyse. I began to look more closely at the nature of our monetary systems, learning how banks create our money supply when they issue loans, and the various problems that system causes in economy and society (Bendell & Greco, 2013).

Another experience in 2008 challenged the view that large incumbent firms could drive much change after all. At the end of 2007 WWF-UK released a report I conceived and co-authored on the social and environmental performance of the large firms that own the world's most famous luxury brands (Bendell & Kleanthous, 2007). The report was constructive, but did not avoid criticism. Most of the brands reacted defensively and embarked on extremely cautious and piecemeal engagement with consultants and NGOs. Like many who worked in partnerships, I had always argued for the ongoing role of NGOs as watchdogs, but yet again I was seeing the difficulty of a large NGO in playing that role, and how business reaction can be very cautious and ineffective. Yet this time there was a twist. During 2008 I was approached by lots of entrepreneurs, who had read the report and expressed enthusiasm about this overarching narrative and vision, as it connected with what they were trying to achieve with their own small firms. This led me to focus on the processes of 'disruptive innovation' and develop a theory of “elegant disruption” on how aspirations are key for many innovations to scale and challenge incumbent firms (Bendell and Thomas, 2013).

Putting these two things together, I began to wonder how an entrepreneurial approach might drive change in, or provide alternatives to, our monetary systems. These were two very new areas for me, and so I ‘outsourced myself' to India in late 2009 and created a pop-up social activist hub in Auroville with monetary activist and community currency innovator Matthew Slater. There I learned more about monetary systems, currency innovations, and the mechanisms of disruptive innovation. I also began consolidating my work on partnerships and corporate social responsibility (CSR), in preparation for “moving on” into new forms of work. Yet it took two years before I felt comfortable with emerging professionally on this agenda, when I gave a TEDx speech on The Money Myth. The speech now has been seen over 100,000 times on Youtube, but it did not resonate well with many of my existing clients and professional colleagues in the CSR and sustainability fields, who thought I was going into areas I was not expert in, and as they found my arguments incredulous (yes, banks create our money!). I'd finally traversed a professional tramline. More people now understand that money and currency is a relevant topic for debate and design, and so I'm considered less wacky than a few years ago.

In an attempt to bridge this new focus with my previous work, in the introduction to my latest book Healing Capitalism, I explore the case for why business leaders who are concerned about sustainable development could support fundamental monetary reform, and experiment with alternative currency systems (Bendell & Doyle, 2014). What might this mean for cross sector partnering? To explore that, I would like to return to the spirit of 1995. In so doing, we should recognise that most current partnering is conservative, and that even if promoting innovation, is still focused on incumbent large organisations, rather than start-ups and community networks. We should also recognise that there could be some incumbency in the research community on partnering that a spirit of 1995 would imply we break free from.

I suggest that practitioners should experiment with a new wave of revolutionary cross-sector alliances. In the spirit of 1995, these partnership ideas will be creative and experimental attempts to create major social change, and reject the dominant norms of what is expected of business, social activists and academia. As an action researcher, I see a role for academics in instigating such creative discussions and helping practitioners to experiment, rather than being neutral observers (Reason & Bradbury, 2001). An area that I have been exploring in recent years is the creation of local currencies. These types of small scale initiatives may sound strange to us now. The Marine Stewardship Council sounded strange to many people when I proposed it in 1996. Innovators don’t spend time convincing people in order to be accepted as ‘normal’, but work to make manifest their visions.

Twenty years after I started my career in social and environmental change by working on cross-sector change, I advocate that those of us interested in this practice move beyond a focus on incumbent organisations, to catalyse and analyse partnerships between those that are not large, not established, and who can pursue a truly radical agenda to transform capitalism and governance. Although I still think existing partnerships can and should evolve to be more systemic and we can research their efforts usefully (Bendell, 2011), the spirit of 1995 would suggest a very different approach today. A revolution in the domain of partnering, where different types of actors collaborate on projects that could radically transform today’s form of capitalism, would constitute a partnership revolution, for both practice and research.