Today IFLAS releases its 2nd Occasional Paper on themes of leadership and sustainability. “Deep Adaptation: A map for navigating the climate tragedy” addresses in depth some implications of the most recent climate measurements and science. 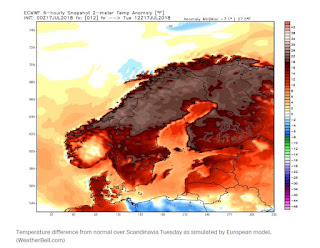 Sadly, the analysis leads the author to conclude that climate-induced collapse is now inevitable. Professor Bendell studied climate science as part of his degree at the University of Cambridge in the 1990s, and only returned to the primary studies this year after seeing the increasingly worrying news about current changes to our atmosphere and its impacts on our ecosystems at sea and on land. “For the past decades I had relied on the assessments and guidance from the Intergovernmental Panel on Climate Change – which was worrying enough” said Bendell, a full Professor of Sustainability Leadership. “But the measured changes in our current environment have outpaced even the worst predictions of the IPCC over the past decades. The leading climate scientists are reporting a much worse situation than the IPCC.” The paper looks at peer reviewed journals and supplements that with the latest data direct from research institutes on climate. “The whole field of sustainable development research, policy and education, and sustainable business in particular, is based on the view that we can halt climate change and avert catastrophe” explains Bendell. “By returning to the science, I discovered that view is no longer tenable. I then explored why people who work in this field, whether as researcher, activists or policy makers, may have been ignoring this difficult truth. It is understandable – none of us want to suffer, none of us want to think years of work has been futile, and none of us want to be admonished by colleagues or ridiculed online.”


The paper was recently rejected by anonymous reviewers of an academic journal which Bendell has published in before. He also guest edited an issue of the journal last year. “The reviewers wanted the paper to build on existing scholarship in the field, whereas, unsurprisingly, my literature found no prior publications premised on a social collapse due to a global environmental catastrophe” said Bendell. In saying the paper was not suitable for publication, one of the comments from the reviewers questioned the emotional impact that the paper might have on readers. “I was left wondering about the social implications of presenting a scenario for the future as inevitable reality, and about the responsibility of research in communicating climate change scenarios and strategies for adaptation.” wrote one of the reviewers. “As the authors pointed out, denial is a common emotional response to situations that are perceived as threatening and inescapable, leading to a sense of helplessness, inadequacy, and hopelessness and ultimately disengagement from the issue…”


That perspective is discussed in the paper as one that enables denial. Professor Bendell explains in his response to the Editor, that the response may reflect “the self-defeating hierarchical attitude towards society that many of us have in both academia and sustainability, where we censure our own exploration of a topic due to what we consider should or should not be communicated. There is both scholarship and experience on the impact of communicating about disaster, and I discuss that in the paper.” Moreover, Bendell consulted with practicing psychotherapists on both the motivational and mental health implications of this analysis and was reassured that perceptions of a collective tragic future should not in itself be a cause for depression. Instead, it could trigger transformative reflection which could be supported - and would be inevitable one day, given the inevitability of mortality for all human life. Bendell has blogged on his letter to the editor here.


"I am releasing this paper immediately, directly, because I can’t wait any longer in exploring how to learn the implications of the social collapse we now face," Bendell explains. The paper offers a new framing for beginning to make sense of the disaster we face, called “deep adaptation.” It is one that Professor Bendell proposed in a keynote lecture two years ago and has influenced community dialogue on climate change in Britain in the past two years, including in Peterborough and Newcastle as well as being used by the Dark Mountain network.
"Perhaps the paper will appear in a journal one day," says Bendell. "I still believe in the role that we in academia can play at this difficult time, but I can't wait around given the urgency of the situation."


The paper “Deep Adaptation: A Map for Navigating Climate Tragedy” is downloadable as a pdf from here.


A LinkedIn group on Deep Adaptation exists to support professional discussion of the topic.


Professor Bendell will be presenting the paper at the Poetics of Leadership Conference in September at the University of Cumbria and exploring implications during the Foundations of Sustainable Leadership short course immediately after the conference in Ambleside, UK.
Bendell provides links here to articles, podcasts, and videos to help people manage emotionally with this information.

After reading a version of the paper Professor Wadhams corrected a mistake in citing his conclusions on the reduction of the Arctic albedo effect. His finding of a 50% increase in warming from an ice free Arctic was misquoted as doubling the effect of warming from anthropogenic emissions. It has been corrected to say a 50% increase. The author is pleased with the reduction in the predicted heat exacerbating feedback, though concludes it makes no difference to the argument that IPCC predictions have been too cautious and that current measurements provide evidence of runaway climate change (which the author concludes will lead to social collapse, which therefore requires a shift in attention to "deep adaptation").
Posted by jem at 21:03