Dr Wolfgang Knorr is a senior climate scientist, most recently with Lund University, Sweden. IFLAS invited him to write an article on the response of the climate science profession to the climate emergency.
TIME FOR ACCEPTANCE
The climate crisis demands new ways of thinking – scientists should be first to admit failure and move on.
By Wolfgang Knorr
A universal policy failure

Inarguably, one of the most significant and long-lasting legacies of the 50-year old Apollo programme was the life-changing experience its astronauts had upon viewing the earth from the vantage point of another celestial body. The vision they described of its fragile and delicate beauty is all the more striking and poignant at this moment in climate emergency.

We, that is to say, humanity has this beautiful planet, home now to 7 billion people with nowhere else to go, and are running a reckless experiment, that has taken the Earth system right out of the mode of operation it has been running in for millions of years. Climate and earth scientists should be and should have been the first to see the utter insanity of this hellishly dangerous undertaking.

But in some strange way, and despite the warnings over the past decades of many individuals such as Roger Revelle, Jim Hansen, Kevin Anderson, to name but a few,–– it appears the latest generation of protesters, from Fridays for Future to Extinction Rebellion – have done far more to hammer home the real message that climate crisis cannot be taken lightly, and is urgently and ultimately a most horrifying question of life and death. We do not know when it will happen and who will be hit first, but one thing is certain: if we do not change course quickly, things can get very nasty indeed.

I am not advocating sending climate researchers to space, or holding the next climate summit on the surface of the moon – not least for the tremendous CO2 emissions that would entail. But after 27 years as a climate and Earth scientist, I believe that it is my own profession that most urgently needs to take a huge step back and view the whole planetary picture from a new perspective. After decades of climate system research much of it coordinated with a political process to mitigate climate change, global CO2 emissions keep rising in a quasi-exponential fashion (see Figure).1 As far as the atmosphere is concerned, there has been no action on climate change whatsoever. If we were some kind of super bug that has found a way of rapidly decomposing deep carbon reserves, the picture would not alter in the slightest. Any extra-planetary observer of the current crisis with advanced remote sensing capabilities would be compelled to conclude there is no intelligent life on Earth. 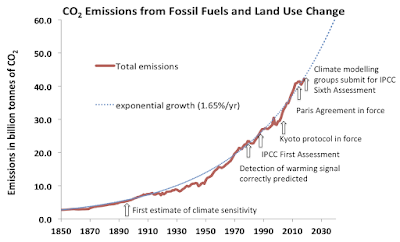 How and in what way have we as scientists contributed to this disastrous failure of climate policy? The first point indicates scientific conservatism and has been noted before by many.2 It is our job as scientists to question new theories to make sure they hold up. So, we demand to know how certain we are this is true. But what we do not ask is if we can be sure this effect will never happen. This latter is how anyone is trained to think in an emergency situation.3 The best-known example is probably the Intergovernmental Panel for Climate Change's (IPCC) decision to explicitly exclude ice sheet melt from its Fifth Assessment Report's estimate of future sea-level rise. It is now widely believed that there is a substantial risk of much more rapid change, mainly due to the possible collapse of the West Antarctic Ice Sheet.4

The second has to do with our holding on to illusions, for fear of inciting panic. The IPCC's Special Report on 1.5 degrees warming gives a remaining emissions budget as of 1 January 2018 of 320 billion tonnes (Gt) of CO2, when accounting for some Earth system feedbacks.5 Using the latest estimate for 2018,1 and a continuing exponential rise in emissions in accordance with the last 170 years,6 I conclude that the budget given by the IPCC will be exhausted at the beginning of 2025. Past investment in fossil-fuel and energy infrastructure alone has been estimated to commit the world to emitting 658 Gt CO2, as of 2018.7 Given that the approach of climate policy has been to address fossil-fuel emissions at the demand and not the supply end,8 and that the negative emissions technologies that dominate the IPCC's below 1.5 degree warming scenarios are unproven,9 it is extremely unlikely the Paris Agreements goal will be met.10 But even the publications outlining the most dramatic scenarios – scientific or popular – never seem to say it is too late.

Another way we, as scientists, have contributed to the crisis concerns the excessive rationalisation of a threat. In other words - we switch off common sense and produce scientific results borne of idealized models – be they mathematical or intellectual. All of us are probably well apprised of the knowledge that there is no decisive and radical action on climate change – no car free Sundays as enforced during the 1980's oil crisis (I'm old enough to remember!), no massive push towards public transport, no willingness to stop the continuing rise in air travel, or awareness of the enormous energy consumption of the internet.11 The Climate Action Tracker initiative estimates that given existing pledges, the world is heading towards 3 degrees of warming.12 As citizens we all know the difference between a politician's words and deeds and we are all painfully aware of recent changes in the geopolitical landscape, implying a very real risk of a 4 or higher degree of warming.13 And yet, the IPCC's various assessment reports have repeatedly relied on highly idealized so-called integrated models that know and admit nothing of these things, and therefore be easily bent to produce results that fly in the face of common logic.14 In our official model, this purportedly objective approach is the very one implemented to inform policy makers.

Finally, Paul Watzlawick's famous dictum that we cannot not communicate is also true for us climate scientists, even if we do not want to hear it. By going on with our daily routines and not rebelling – filling in another grant application for looking at yet another tiny detail of the complex web of cause and effect that is the planetary climate system, following the demands of a funding system that might serve the interests of politicians as much as those of humanity – we send out a powerful message that everything is under control. The way the IPCC's assessments are structured makes it very clear that regarding climate change, we are dealing first of all with a physical problem (Working Group 1) that has impacts on the natural world and societies (Working Group 2), that have to be dealt with by technical solutions (Working Group 3)15. An alternative point of view may be simply expressed by saying we are dealing with the mundane problem of good housekeeping – the original meaning of the Greek word "economy". Climate change, biodiversity loss, overfishing and air pollution could also just be symptoms of a more fundamental problem: that the word "economy" has assumed a different meaning from its origin, and that we cannot imagine a functioning economy without never ending growth supported by unlimited resources.16

The fact that we have been so stunningly unable to react to climate change may have to do with a failure to see precisely where the problem really resides and that the community of climate scientists have falsely assumed the position of superior expertise, where in fact it should have belonged to social anthropologists, historians, psychologists, and political and social activists. If this is so, it would explain the remarkable success of the latest protest movement, and the failure of the science and policy establishment.

If we take this point of view on board for a moment, it becomes clear where the way out of the crisis can be found – at least in principle: acceptance of our collective failure, humility on the part of the "experts", and immediate action from the human side of the problem. Most of the funding so far plunged into expert meetings, science conferences, computer resources, expeditions and lab work should now go towards building social capital and political trust, the facilitation of pertinent, open debate, and the establishment of global democratic institutions with capacity to deal with a global problem that – so far – has been impossible to tackle.

[To read an interview of Dr Knorr by the founder of IFLAS, Professor Jem Bendell, see here]


5CO2 released through permafrost melt and methane released by wetlands.


6The rise of 1.65% per year is the one that corresponds to the long-term trend as shown in the figure. However, since 1945 emissions from fossil-fuel burning have been rising much faster for most of the time, see Hansen J. et al. Assessing ‘‘Dangerous Climate Change’’: Required Reduction of Carbon Emissions to Protect Young People, Future Generations and Nature, PLoS ONE 8, e81648, doi:10.1371/journal.pone.0081648, 2013.


13Special issue of Phil. Trans. Royal Soc. A, 'Four degrees and beyond: the potential for a global temperature increase of four degrees and its implications' Vol. 269, 2011.


14This refers in particular to Chapter 2 of the IPCC 1.5-degree Special Report. Figure 2.4 shows a range of socio-economic scenarios, of which most seem to comply with the constraint that climate change is limited to less than 1.5 degrees above pre-industrial levels. Figure 2.5 then shows that a large number of them imply massive negative carbon emissions during the period, to the amount of a quarter of half the current positive emissions. I assert here that to think our willingness to engage in altruistic behaviour on such an absolutely massive scale,  one that would reach levels of carbon flux comparable to the much easier activity of burning fossil fuels – driven by selfish desire for convenience –  is truly and utterly in defiance of common sense.


15For a wider discussion of the implications of the General Circulation Model view of the climate problem see Demeritt, D., The construction of global warming and the politics of science, Ann. Assoc. American Geographers, 91, 307–337, 2001.

The author thanks James Rumball (mail@jamesrumball.com) for suggestions and copy editing.