Dr Read takes as his starting point the failure of political processes to respond to the challenges of dangerous man-made climate change that have been understood since the 1970s, arguing that the Paris agreements of 2015 are "absolutely nowhere near enough", and in any case stand "actually in stark contradiction to what [the countries] are actually planning to do".

The Occasional Paper is a referenced and edited version of a talk Dr Read gave at the University of Cambridge in 2018. In his estimation, what is required to 'get around' the current failure, is 'something completely unprecedented'. In the face of a total collapse of civilisation we can either talk about transforming our existing civilisation or building a new one out off the wreckage of the old. Whichever way, the civilisation we inhabit is finished: because if something survives from it, that something will be utterly different from what we are used to.

Those are themes he has explored elsewhere, but this talk was addressed especially to young people, such as students. He had a range of suggestions for them, starting with "Wake up!", starting a new honest conversation about our fears, and imagining a successor civilisation. We need to build lifeboats while implementing the 'holding actions' described by Joanna Macey to hold the damage at bay and slow it down. His final suggestion is to stop: to reflect rather than reacting only from anger or shock.

Along the way, Dr. Read positions his thinking in close relation to the “Deep Adaptation” paper of Prof. Jem Bendell’s, which was the 2nd IFLAS Occasional Paper. IFLAS issues Occasional Papers to stimulate wider and more rapid debate than is possible through peer-reviewed academic journal. Feedback is welcomed to inform revised papers for subsequent publication. To engage with others on these topics, consider the Deep Adaptation LinkedIn group. The latest thoughts from Prof Bendell are available via www.deepadaptation.info 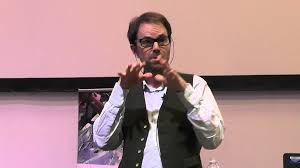