Talk to mark the publication in French of Adaptation Radicale, by Jem Bendell

Hello, I’m Jem Bendell. I’m pleased to be able to offer some comments to mark the publication of my first book on Deep Adaptation, which is available in French and is being published in France by a publisher whose name I won’t try and say in French, but I love the translation into English. They’re called “the bonds that free us.” I’d like to thank the translator Elise Roy, as well as the team at the publisher, also Pablo Servigne who encouraged me to collaborate to make this happen. He also writes the foreword. Also I’d like to thank the volunteers at the Deep Adaptation group in France, including Julian, who have been helping coordinate some outreach about the book.

So, what I’m going to do is offer about five minutes of reflections to help put the book in context. The book is a compilation of writings for people who are already open to the idea that the collapse of our way of life within an industrial consumer society is now either likely, or inevitable, or already occurring. I think the book is suitable for a French audience because since 2015 when Pablo Servigne and Raphael Stevens published their book on what they called ‘collapsology,’ the discussion and level of dialogue in France is more advanced than in many other countries - particularly the countries that I know about because they’re English-speaking.

Both in France and around the world we are hearing from people who are critical of those of us who are having these conversations. In response, I would suggest one way of talking to them would be to show them this graph, which just came out from a member of the Breakthrough Institute, which shows simplified emissions pathways for climate targets. This is based on Intergovernmental Panel for Climate Change (IPCC) data and analysis, but it removes the suggestion that we can roll out carbon capture technologies which would strip carbon using direct air capture from the atmosphere. 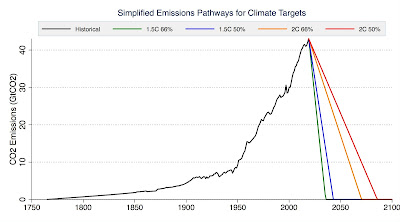 So that’s not like slamming on the brakes of a car heading towards a wall, that’s actually slamming it into reverse and immediately going at the same speed in the opposite direction. We should recognize here that our carbon emissions prior to 2020 have been increasing in terms of the rate of increase. In fact, one scientist has suggested that it looks like an exponential curve of carbon emissions. So we all know that if you do that with a car that just damages the engine and isn’t actually possible with the current technologies to just suddenly slam a car into reverse like that. There is obviously a lot of inertia in our hydrocarbon society.

So what’s happening when people criticize those of us who want to talk about preparing for collapse, whether in the collapsology field or in the Deep Adaptation field, or other fields, they’re telling us that we have the burden of proof on us to say that the red line is not the future path for our carbon emissions let alone the safer lines. Really, we should be aiming for at least the green line. I believe that the burden of proof really should be on them to show us, against all evidence, how we’re going to go down any of these simplified emission pathways to reach these climate targets. I  think they can’t prove that this is happening, or will happen, because it’s not been happening.

It’s almost like these conversations at the intergovernmental level and within the scientific community on climate change are trying to maintain credible myths about what is possible, in order to take us away from actually staring at the trouble directly ahead of us. 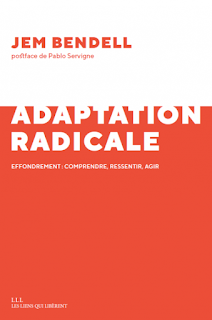 “Adaptation radicale” is the most effective French translation of the term “Deep Adaptation” which I introduced with a paper by that name in 2018, which has now been downloaded around a million times. So this is my first book to follow that up and it does include an updated version of that 2018 paper, but that’s the sum of the climate science in the book instead. And I don’t go into more discussion of the various mechanisms of societal collapse. Instead the book really focuses on the people who already have this outlook and are really wanting to engage kindly, wisely and creatively in what to do about it, both in their individual lives, in the community and also through the political process. So it’s a compilation of writings that I shared over the last two years to support people who are using the Deep Adaptation framework for their own lives and their own work.

Over the last couple of years I’ve been humbled and inspired by so many people from around the world who have engaged creatively with this anticipation of societal collapse. People are doing amazing things, many of which I could not have imagined. People bringing meditation and mindfulness practices into schools. People working together on community gardening. People deciding that they will give up their freedom to peacefully protest against governments on climate inaction. Scientists who are giving up their old career in order to look at new things such as designing mirrors that will float in the Arctic ocean to try and replace the albedo effect. People who are learning about how to hold online death cafes so that people can share their very difficult painful emotions around the predicament we find ourselves in. There’s such a great diversity and I know that this is a field where people, many people, will have quite strong opinions and some of the things I’ve just mentioned they may be confused or annoyed at. But for me it’s all welcome if it’s with an open mind and open heart. Because nobody has the answers. We’ve never been in this kind of situation before as a species.

Some of that creativity, some of that collaboration, is happening within a place called the Deep Adaptation Forum which is an online community for people to connect with each other, to learn from each other, and to try and create resources that will be helpful for when there’s a much wider mass awakening and people start to engage more widely. That forum has over 100 volunteers now and engages at least 15,000 people on its platforms and so I do recommend you check out deepadaptation.info if you haven’t already.

In my experience people engaging in Deep Adaptation do not equate societal collapse with the extinction of the human race - they’re two quite different ways of understanding our situation. My understanding is that people do not become apathetic - so many people have allowed this information to transform their lives to prioritize truth and love in their lives and become very socially engaged in ways that they hadn’t before. I’m noticing that many people do not respond in an individualistic way about just simply trying to protect themselves and their loved ones. People soon realize that that is so limited and that we need to act collectively together in order to try to reduce harm, reduce suffering, and give ourselves a better chance in the face of this calamity.

Over the last couple of years I’ve come to see how important it is for us to hold space for each other’s difficult emotions - whether that’s fear, grief, sadness, or anger, in a way where we don’t then escape into stories of safety or blame, but actually just recognize that each of us are having difficult emotions because we are fully awake to the situation that we modern humans have caused.

Because as we all feel more vulnerable, we could be more easily manipulated with a simple story of safety or blame. But neither will help and instead if we can support each other to neither act from or be averse to these difficult emotions and instead keep fully present to what the situation is and keep open to new ideas and learning from each other and unlearning with each other about what on earth do we do next. Then I think we’ll see much more interesting ideas emerge and initiatives emerge and for me that is what has been happening both in collapsology and in the Deep Adaptation field over the last couple of years.

Like me many people have been on a journey of inquiry into why we caused this mess and when I say we I’m talking about modern humans. That inquiry reveals how we have othered and oppressed other humans often because they just don’t look like us or sound like us and also othered and oppressed wider life itself. So many people are arriving at a deeper commitment to uncovering mechanisms of oppression and therefore more people are prioritizing racial justice and healing as part of their work on Deep Adaptation. Many people are prioritizing work on gender justice and healing as part of their response to Deep Adaptation. And many more people are thinking about economic justice and healing as part of a comprehensive response to our climate predicament. I think that’s really important because it is quite distinct from how some people are responding, or probably will respond, when they feel vulnerable because of growing climate chaos and related societal pressures. Many people will tell us that the situation means that we just need to do ‘what’s necessary’ and they’ll come at it from a very fear-based place, not actually looking at how so much of our society is built on that fear-based place of separation and othering and oppression.

So thank you for listening, thank you for reading the book, and please consider joining the Deep Adaptation francophone group, which you can connect to on Facebook. I’ll put the link to that and any other relevant groups in French, for example the collapsology groups, in the video notes for this video. Thank you.

Some of the writing in English that went into the book is available from Jem's blog here.

An interview with Jem to mark the launch of the book is here. 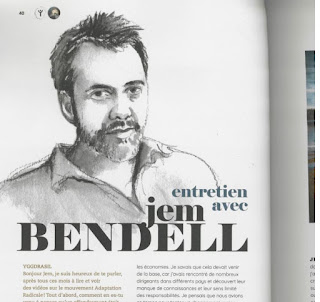