The release of the Deep Adaptation paper by IFLAS in July 2018 has generated significant attention worldwide. It has been downloaded over 200,000 times, mentioned in media around the world (from Bloomberg to the New York Magazine), and inspired a new generation of climate activists, including some leaders in the Extinction Rebellion movement. Given that impact, Professor Bendell was one of the first academics to sign a public letter supporting the launch of the non-violent rebellion - one of the Guardian's most shared letters ever. 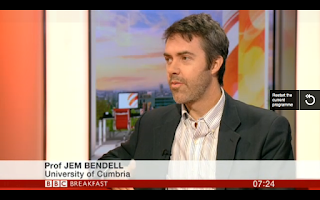 In his paper, Professor Jem Bendell reviewed the latest climate science as well as the pace of response to conclude that humanity now faces inevitable collapse of our societies due to disruptive climate change. He invites readers to explore what an acceptance of that situation could mean for our life and work. He created Deep Adaptation as a framework to aid that exploration. It differs from the mainstream agenda on adaptation as it is premised on the belief that we will not be able to maintain our current systems and way of life in the face of disruptive climate change. Bendell explains "the concept of Deep Adaptation has been unlocking conversations on our climate tragedy because it helps make it slightly more acceptable to discuss our fears about how bad things are and what to do about that."

In the past months Prof Bendell has given some speeches and interviews about this topic. These included a public lecture to 300 people in Bristol, UK in December, then an interview with Scientists Warning TV.

Jem was also interviewed by Extinction Radio and the Future is Beautiful podcast. In 2019 he will be speaking about Deep Adaptation at a range of events, listed here. The topic will also be explored in the leadership course he tutors this summer, over 4 days in the Lake District, UK. He is also now supervising doctoral researchers who are linking their work to the Deep Adaptation agenda.

Given the reaction to the paper, Professor Bendell provided further reflections in a blog on hope and vision in the face of climate-induced collapse. He will be discussing these psychological aspects at the Climate Psychology Alliance event in London in April.

To help the wide range of professionals who want to explore this agenda but are finding their colleagues too incredulous to engage, Bendell is launching a free Deep Adaptation Forum in March. This will enable closer collaboration than the 1000+ Deep Adaptation group on LinkedIn (join that to receive the information on the forum launch).
Posted by jem at 15:28