Executive Rebellion – when should we take to the streets on climate?

In September 2019, co-founder of Extinction Rebellion, Clare Farrell, who is also a lecturer at Central St Martins, gave an open lecture at the University of Cumbria, where she was introduced by Professor Jem Bendell. In this article, Dr. Bendell reflects on whether and how executives could respond to the growing protests on climate change. (The opinions are the author's, not an organisation).

Climate protests are becoming unmissable. The youth-led climate strikes and Extinction Rebellion (XR) are mobilising millions of people around the world to demand significant action on climate change. This awakening amongst the general public is heartening for people who have been championing change within their organisations for years. Heartening, yes, but also confronting. Because the message from the streets is that efforts within the current economic system have not been enough – and won’t be enough.

Activists like XR co-founder Clare Farrell point out that decades of initiative have not stopped carbon emissions increasing at near exponentialrates since the industrial revolution. In her lecture at our University, she explained how the lack of change led her to take non-violent direct action. Unfortunately, the latest climate models are warning us of a catastrophe ahead that would unravel civilisation. Climate anxiety is spreading for good reason. It is the sane and informed response.

Faced with this challenge to the economic and political systems we live within, what could executives in the private sector do? Some have expressed support for the protesters, for instance in public letters. Others have heard the alarm and are planning their escape to places they consider safer from the ravages of climate change. But will a bunker really insulate anyone from the collapse of agriculture due to extreme weather? No – as XR Spokesperson Dr. Rupert Read explained in an Occasional Paper for us, if resilience to future disruption is possible then it will be collective. It will involve whole societies coming together to curb emissions, adapt to extreme weather and soften the breakdown of our normal ways of life. That means system change - and fast.

So how might busy executives join this rebellion? Sitting on a street and waiting for arrest might not seem like the best use of your time. Though scoffing at such tactics would be churlish when nothing else has been effective yet on the climate emergency. People of all ages and from all walks of life are joining protests in over 60 cities. But how else might a busy executive rebel? I recently discussed this issue with both leaders in Extinction Rebellion and senior executives who have been applauding them from the side-lines.

As a result, I can share with you four steps you could take to join an executive rebellion against the ecological and climate crisis. Two of these involve using the power you have if you are a senior manager.

First, stop pretending to yourself or anyone else that corporate responsibility, social enterprise, sustainable business or responsible investment will make a dent in the problem at the scale or speed that is required. As someone who worked for over 20 years on voluntary business responses to environmental problems, I know the seductiveness of the story that we can take meaningful action within current systems. But it is time to let that go. Instead, you could seek to ensure that your company is not undermining, directly or indirectly, government action on the ecological and climate emergency. And commit to learn about how the system needs to change, rather than seeking more influence over the way it might.

Second, engage internally within your organisations on the truth of the situation. That means discovering how much disruption to water, food, finance, and the international order is already underway and spreading. Create employees’ assemblies to help staff and families begin to explore how to prepare emotionally and practically for that disruption, and how to help others. Empower them with funds to back what they decide to do in their communities.

Then consider what you can do outside of your organisation to leverage the capabilities you have an executive. Find time to reach out to activists to help them better understand how to upend the current system. For instance, to leave oil in the ground, it would help if activists knew who sets the accounting rules for large oil firms to keep valuing that stranded black stuff as an actual asset. Or if you know how precarious the just-in-time supplies of key food stuffs is becoming, the public should hear about it. The activists are asking for that help. It is why they have launched TruthTeller.life for executives to secretly rebel, by safely leaking information on inaction or the vulnerabilities in our global economy to top journalists.

But I think I’ve saved the best advice for last.

The climate crisis is an existential one, threatening the future of humanity. The best thing one can do for children today is not to buy them a fancy education or top up their trust fund. Rather, it is to drop everything in order to try and slow the climate crisis and adapt societies to the difficulties ahead. So the fourth step you could take is to quit. Because our jobs are not as important as the climate crisis. Key leaders in the movement quit their jobs to join in full-time. Andrew Medhurst, quit his job in the City of London and ended up finance director for Extinction Rebellion. Alison Green quit her job as a Pro Vice Chancellor of a university to join the rebellion. Since then she set up Transition Lab to develop the policies for transformation. Another option is to go part-time, to find more time for the climate cause. Thanks to the flexibility of the University of Cumbria, that is what I did, so I could launch the Deep Adaptation Forum for people to prepare both practically and emotionally for breakdowns in our way of life. It is rapidly becoming a gathering place for people who wish to rebel just enough to help their professions adapt deeply and fairly to the troubles ahead.

Executives in the private, government and charity sectors all face growing frustration at the clear net impotence of our actions on climate change. This ‘stasis anxiety’ will grow as the news on extreme weather and the latest science becomes more worrying. Extinction Rebellion call on “everybody now” to act with urgency. As protests unfold in cities around the world, it is time to consider joining an executive rebellion on climate change.

Clare Farrell was a student on the sustainable leadership course, taught as an intensive residential by Professor Bendell just once a year in the Lake District, UK. The next cohort gathers in April 2020. You can read more or apply here. 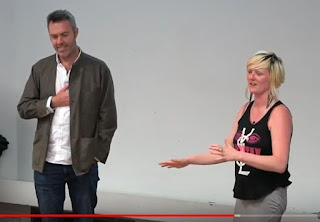