“There is no way out of our Covid debts with the current monetary system, unless we speed up our consumption and destruction of ecosystems which then increases the risk of future pandemics. It's a debt catch-22 that we will only escape with monetary reform. The deaf ears of politicians on this matter is why some people think a Money Rebellion has become necessary,” explains co-author Professor Jem Bendell, University of Cumbria.

This new research paper “Monetary Adaptation to Planetary Emergency” joins the debate about what can be done about the massive Covid-related public debts. It argues that there is no way out of this debt situation that won't make future pandemics more likely, unless there is monetary reform. The authors argue that neither more GDP growth nor more borrowing is the solution to unprecedented levels of debt. Instead, the role of government treasuries, central banks and banks must now change.

Currently, money is created by private banks when they issue loans. This paper argues that such a system means that our economies are forced to expand, whether or not a population wants that. Such a Monetary Growth Imperative arising from the unique privilege of private banks issuing money is now untenable due to both climate change and evidence that environmental damage generates pandemic risk.

The paper notes the increasing likelihood of disruptions to economic systems from the direct and indirect impacts of environmental change means that the current monetary system is neither resilient nor helping humanity become more resilient.

For twenty years, and with little influence, some environmental economists argued that the way money is issued into circulation forces the economy to grow, and that only fundamental monetary reform could change that. But over the last decade some economists influential in environmental policy communities, including the field of degrowth (and postgrowth), have argued that capitalism without growth is theoretically possible. This paper shows, in simple terms, they were mistaken to conclude that, and it makes the case again for systemic changes to our monetary systems.

Therefore, the authors show how even green-tinged economists have been misinforming both activists and policy makers. The paper suggests that as members of the establishment, academics often have a bias towards questions, conclusions and narratives which will be acceptable to power. As an economist, sociologist and community activist, the three authors call on the economics profession to look again at the way the banking systems force our economies to expand in order to avoid disruption to businesses, jobs and financial assets. They argue that no criticism of capitalism is coherent nor a credible basis for alternatives unless it addresses the Monetary Growth Imperative.

“The world is in an unprecedented mess. This means, among other things, that economists should question their assumptions, or risk becoming outdated and toxic. The money system is a major, often overlooked driver of economic behaviour, and it needs urgent reform. It's time for a radical overhaul," explains co-author Professor Christian Arnsperger, University of Lausanne. .

It is the first academic paper that directly challenges economists in the environmental field to stop being anti-radical in their assessment of the need for monetary reform.

“Despite recent academic doubts, the current monetary system requires that economies must expand in order for the money supply to be sufficient to service debts. That means there must be wholesale monetary reform to reduce the destructive pressure on the environment and give space for communities and societies to try to adapt,” explains co-author Matthew Slater, Community Forge.

The authors conclude that if they are issued in responsible ways that protect privacy and rights, then Central Bank Digital Currencies are one policy option to help countries to escape the Covid debt catch-22. “At least the rise of crypto currencies has been an innovative disruption which is propelling some central banks to shift into the 21st century” said Professor Bendell, who ten years ago predicted that Facebook would launch a currency one day, and described Bitcoin as making people rich, in his TEDx speech on the need for monetary innovation and reform.

The paper also provides backing for a novel approach to monetary policy where governments would enable the widespread use of different currencies for accumulation and for circulation.

How will these ideas get any traction within the field of economics? Perhaps the climate crisis will be the trigger. Looking at the climate movement, Professor Bendell explains that:

“Many campaigners and policy makers claim that we now need system change because of the climate crisis. They can be forgiven for not knowing how that must involve changing the monetary system, as the topics of money and banking have been made opaque by many economists. So let’s simplify the matter this way. The current money system means that humanity is being forced to expand our consumption and destruction of the natural world, threatening life on Earth. Therefore you would not be credible to call for bold action on climate if you are not calling for deep changes in banking. So while it might be fashionable in some circles to say neoliberalism is over or that capitalism is broken, unless you get specific on the brokenness of the monetary system and what must change, then you aren’t coherent. The burning forests, flooding cities and failing harvests tell us that we are out of time for pussy footing on deep changes to banking and monetary systems ”

The paper can be downloaded here.

A recording of a webinar with the authors will become available here.

If you are working on this, then consider the Business and Finance discussion group of the Deep Adaptation Forum. In addition the global Scholars Warning initiative have a discussion thread on economics within its community. if you have a doctorate, you cab consider signing the letter and joining the initiative here. 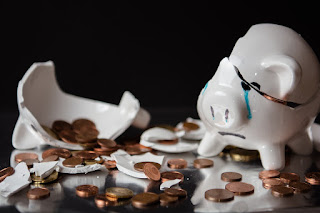 To reference this paper:

To reference this blog:

The video of the webinar to launch the research paper on the need to transform out monetary system: https://youtu.be/CZ81-IduGfg