The 27th UN climate conference, this time in Sharm El Sheikh, Egypt, is underway. On November 7th at COP27, University of Cumbria Professor Dr Jem Bendell, hosted a presentation by the founder of the MEER Framework. Dr Ye Tao presented the crucial need for more options for cheap, local, ground-level and safe solar reflection systems. "These are not the grand schemes of venture capitalists or billionaires, but simple tools that might help the poor to cope with extremes of temperatures" explained Professor Jem Bendell. "They need urgent testing and refinement, as without them, progress towards netzero could have a really hot twist in the tale for the urban poor when the dimming effects from dirty fuels are reduced."

The video of the presentation by Prof Bendell and by Dr Tao is online at Facing Future TV. Scroll to the end for the video. 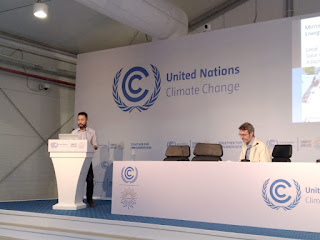 At the end of the session, in the Press Room of COP27, Professor Bendell read out the Scholars' Oath to the Future for the first time. Already 165 scholars from 34 countries have endorsed it, and it is now open for wider support.

The following are the remarks made by Professor Bendell during the session.

"The Guardian reported today that the word 'scary' is on the lips of many scientists. It’s difficult to be scared all the time. But emissions are up. Atmospheric carbon is up. Temperature, sea levels and hunger are all rising. We all know it. But we also know something more incriminating. The talks and agreements at the UNFCCC over the past decades have not managed to change any of it. Instead, they consistently move the goal posts. Back in May 1992 when the UNFCCC was formed, member states agreed to cut emissions to stabilise atmospheric carbon at 354 parts per million by 2000. 22 years ago. But annual emissions have climbed 65% since then. Then the world’s top climatologists stated in 2009 that if global emissions had not peaked by 2020, we would face inevitable catastrophic changes. But annual emissions reached a record high last year. They might continue to move the goal posts, but we can’t play games with nature. Nature will always win, because nature owns us, not the other way round. And that’s despite the stories we tell ourselves about which one of us owns which bit of nature for now.

Faced with the bad news some experts ask us all to calm down. They finally admit that ‘OK it’s already worse than we had thought, but don’t worry, it won’t be as bad as we had thought’. They say we just need all societies on the planet to throw their emissions into high-speed reverse, have the negative emissions technologies defy independent analysis to actually work properly, and be blessed with a lot of climate luck from the ecosystems that we have already disturbed. Opinion surveys show us that vast numbers of people believe that won’t happen. Especially young people and increasingly people in the global south. In response, we see the professional talk-shoppers criticize folks for being ‘too negative’. But people losing their livelihoods or being displaced from their homes do not benefit from such stubborn optimism of the professional classes. Rather, ‘climate brightsiding’ where we are made to doubt what we can see with our own eyes is limiting our agenda. It means we don’t support disaster risk reduction, adaptation and reparations as much as we might. It means we don’t support rapidly deployable technologies that could help people who will suffer the most and the soonest. It means we don’t question the power structures that are sending our children into a hellscape. It means we don’t abandon our old ideas to become more radical.

It’s difficult to be scared all the time. Complete climate honesty is painful, but necessary to try to reduce harm. Today we will hear from Dr Ye Tao about some of the awkward science on climate change and a new initiative that seeks to reduce the growing suffering.

When working at the Rowland Institute of Harvard University, Dr. Ye Tao was beginning to realise just how bad the climate crisis is. In 2020 he founded the MEER Framework after grasping the accelerating and ultimate consequences of the climate crisis on Earth's delicate web of life. Educated as a biochemist, physicist, material scientist, and custom instrumentation developer, he brings the benefits of a multidisciplinary background in engineering and science to the climate crisis."

Facing Future TV. After the presentation, Professor Bendell highlighted the problem that Dr Tao had explained.

"Thankyou Dr Tao for helping us to see that there is a 'netzero paradox' that’s dangerous to people living in big cities in the Global South. On the one hand, the netzero paradox is that global dimming from aerosol pollutants masks how the global average temperature would probably be already one and half degrees celsius higher than in 1890. On the other hand, this netzero paradox is most concerning for how the race to zero carbon will cause deadly temperature spikes in major cities due to the heat island effect and lack of access to local cooling systems. So we need complete climate honesty. An answer must be found immediately and at the very least, in low-to-zero carbon cooling solutions made rapidly available in cities.

Fortunately, in recent months we are seeing more scientists calling for more climate honesty, which includes attention to the bad-to-worst case scenarios. In the journal paper “Climate Endgame: Exploring catastrophic climate change scenarios”, an interdisciplinary team of eminent scientists concluded “There is ample evidence that climate change could become catastrophic. We could enter such “endgames” at even modest levels of warming… Facing a future of accelerating climate change while blind to worst-case scenarios is naive risk management at best and fatally foolish at worst.”

In the journal paper “Climate change and the threat to civilization” other scientists concluded that: "There is, in sum, no solid basis at present for dismissing the broken world and global collapse as too unlikely to merit serious consideration.” In the journal paper “World Scientists’ Warning of a Climate Emergency 2022” a group of eminent climate scientists write that “The consequences of global heating are becoming increasingly extreme, and outcomes such as global societal collapse are plausible and dangerously underexplored.”

These studies echo a public call of over 500 scholars issued 2 years ago for COP25, entitled the “Scholars’ Warning on Societal Disruption and Collapse”. It requests not only to study collapse scenarios, but also be straight with the public and policy makers than this is a plausible future and so we must begin to prepare for it.

These scientists and scholars also admit how the last decades of climate science 'consensus' failed to predict the levels of volatility and damage from current global heating. The most concerning analyses were side-lined, and yet are proving to be closer to reality than the previous 'consensus.' The reasons why that 'establishment climatology' failed to prioritise the communicating of bad-to-worse scenarios must be learned from as we enter more turbulent times. That learning must include scientists, science communicators and other environment professionals reflecting on the past choices they and we have made. Then a new approach would be beneficial, which does not hide behind claims of pure objectivity or wish to project confidence about future scenarios or the human capacity for controlling outcomes. The risk that massive new funding may distort this learning process, as well as future science, communication and policy-making, needs to be recognised. More radical and less-corporate approaches are needed to generate the kind of creative ideas that humanity urgently needs. Over 150 scholars who work on climate issues in 34 countries have therefore endorsed a Scholars' Oath to the Future, which I will read publicly for the first time today."

You can see a Q&A between Prof Jem and Dr Tao here.