Will There be Academic Rebellion on Climate Change?


In September the Times Higher Education Supplement published an interview with me about how I began responding to the latest climate news – by changing the focus of my work and, thanks to my employer, going part time to focus more time volunteering on a side project, The Deep Adaptation Forum. The interview follows below. It accompanied an article exploring what the climate emergency could mean for Universities and academics. A few I know, including Alison Green, Larch Maxey and Wolfgang Knorr, have quit their jobs to focus on new activities. Others I know are struggling to refocus their research and teaching around topics that feel more important and urgent as the climate changes. If you are interested in exploring a research agenda on Deep Adaptation, please join the Research Group of the Forum. I will be talking about the role of Universities during the climate crisis in April 2020. The interview follows below.


Thanks for reading,
Dr. Jem Bendell, Professor of Sustainability Leadership. 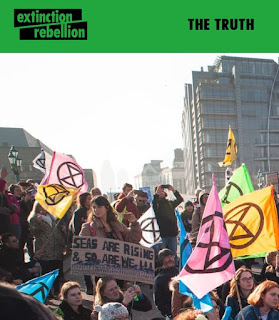 Too little, too late?


For a long time, Jem Bendell was happy to accept the received wisdom about climate change.

Professor of sustainability leadership at the University of Cumbria since 2012, he had previously worked with a range of universities, charities and United Nations agencies on projects relating to health, the environment and social justice. What they all had in common was the framework of sustainable development, which he defines as the belief that “we could somehow balance and integrate social, environmental and economic concerns as long as we were smarter and committed to doing so”.


After beginning to have doubts, however, Bendell decided to take a sabbatical for the academic year 2017-18 and spent several months looking seriously at climate science for the first time since he finished his Cambridge geography degree in 1995. Where previously he had “taken the analyses of the Intergovernmental Panel on Climate Change as authoritative”, he now began to see them as “very compromised” – and designed to “keep people in the room rather than running for the hills”. By March 2018, he had concluded that “disruption to society was not just probable, but inevitable, and most likely everywhere”. He also became increasingly convinced of “the dimensions of denial in my profession”.


Although sustainable development has “collapsed for [him] as an idea”, Bendell still believes that “we need to cut carbon emissions and draw down carbon emissions from the atmosphere, as fast as possible” – as “a last-ditch attempt to slow down climate change, not to stop it...There’s so much heating already locked into the system…Don’t pretend [we can] stop what’s already upon us: the weather which is destabilising and affecting agriculture. That is here and it’s getting worse, whatever we do, and we need to talk about how to prepare, how we deal with it emotionally.”


Reaching such a disturbing conclusion called into question Bendell’s “whole identity and sense of self-worth”. He got actively involved in Extinction Rebellion and has now reached agreement with Cumbria to go down to 35 per cent of a full-time role so he can “focus entirely on climate-adaptation research, teaching and outreach”.


But although he still operates within the academy, Bendell has become impatient with the pace of research and publication, and the many papers in his field that typically conclude, as he puts it, “If we don’t change, then we’re screwed” – rather than frankly acknowledging that “We’re screwed.”

Some of this came to a head when he wrote an article setting out his current thinking titled “Deep Adaptation: A Map for Navigating Climate Tragedy”. Though he submitted it to Sustainability Accounting, Management and Policy Journal, Bendell felt unable to provide the rewrites requested by the referees and published it instead as an occasional paper for the Institute for Leadership and Sustainability, which he had founded at Cumbria. The published version includes a tragicomic account of his correspondence with SAMPJ, which reveals just how far he has gone beyond the norms of his discipline in both style and content.


While a referee had criticised him for not identifying a “research question or gap” based on the current state of the literature, Bendell pointed out in reply that “the article is challenging the basis of the field…there are no articles in either SAMPJ or Organisation and Environment that explore implications for business practice or policy of a near-term inevitable collapse due to environmental catastrophe…”


There was a similar disagreement about how academic articles should be written. In arguing that “disruptive and uncontrollable levels of climate change [would] bring starvation, destruction, migration, disease and war”, Bendell had deliberately adopted a personal and emotional tone: “You will become malnourished. You won’t know whether to stay or go. You will fear being violently killed before starving to death.” One referee commented that “the language used is not appropriate for a scholarly article”.


Whether or not it breaches academic etiquette, Bendell’s “deep adaptation” paper has attracted much interest (with over half a million downloads) and caused a great deal of understandable distress. He is keen to keep engaging with the people he has affected and therefore set up the Deep Adaptation Forum, whose thousand members include over a hundred researchers [NB: now over 10,000 participants].


Meanwhile, in order to avoid the worst-case scenarios, Bendell wants us to look, for example, at how “we [in the UK] could produce more of our own food, no matter what the weather, have policies ready in case prices go through the roof, consider what contemporary food rationing looks like. We need to have that ready to go.” Other challenges relate to “energy security” and “maintaining payment systems for international trade”.


Alongside such practical issues, Bendell stresses the need for “more compassionate and curious ways of responding, rather than just grabbing a gun and saying ‘We have to be ruthless now and not care about the poor or the refugees’”. More surprisingly, perhaps, he also believes that embracing a sense of despair about the human future can be a “spiritual invitation” to ask ourselves “deep, deep questions”.


In abandoning the paradigm that shaped most of his earlier career, Bendell has set out an agenda that raises the deepest of questions not only for climate scientists but for us all.