Critique of Climate Feedback fact checking exercise of an article by the writer Jonathan Franzen in the New Yorker, published September 8, 2019, by leading climate scientists Wolfgang Knorr and Will Steffen.
Fact Checking the Climate Crisis: Franzen vs. Facebook on False News
Last year, the writer Jonathan Franzen, not known for mincing his words, took up an opportunity offered by the New Yorker to bring his very own perspective to the debate about the impending climate crisis. The headline read: What If We Stopped Pretending? The climate apocalypse is coming. To prepare for it, we need to admit that we can’t prevent it.
You would think that this was just another opinion piece on the climate catastrophe, this time by a writer from whom you would not expect new insights about the climate system, but maybe some other truths related to the general human predicament. If you happened to be a social media user, however, you might be in for some surprise. On February 15th, the moderators of the Facebook group Positive Deep Adaptation received a “partly false information” warning about Franzen’s New Yorker article having been posted in their group. The warning explicitly referred to an article by the fact checking site Climate Feedback (see image 1). Following considerable political pressure, fact checkers are now routinely used by social media sites to prevent the spread of “false news”. Sanctions for repeat offenders include reducing visibility for the group or site, or removing the ability to earn income (see image 2).
This gives Climate Feedback’s verdict considerable weight. In this article, we will review the fact checking exercise itself, in order to see if the matter has been handled with the necessary care and level of responsibility. According to their web site Climate Feedback is a worldwide network of scientists sorting fact from fiction in climate change media coverage. As senior climate scientists, our goal is to help readers know which news to trust.
Fact checking the fact checkers
The first thing we noticed was that from the headline and the information below it, it was not possible to tell the exact claim that was being assessed. While the headline read “2°C is not known to be a ‘point of no return’, as Jonathan Franzen claims”, the actual claim by Franzen stated further down was “The consensus among scientists and policy-makers is that we’ll pass this point of no return if the global mean temperature rises by more than two degrees Celsius.” What was left out is some text that in the original article follows immediately after and is therefore an integral part of the claim made by Franzen: “(maybe a little more, but also maybe a little less)”. The verdict: incorrect There is an important distinction here: is the claim being reviewed that there is a consensus – which Climate Feedback easily refute because none of the scientist reviewers seems to subscribe to this supposed consensus – or is it rather about the existence of a supposed “point of no return”? In the following, we will discuss both possibilities.
Contrary to the claim by Climate Feedback, and the entire point made by the last reviewer, Marcus Fontela, there is indeed a scientific basis for Franzen’s article, even though he vastly overrates the degree of consensus or the level of scientific understanding of such a hypothesis. 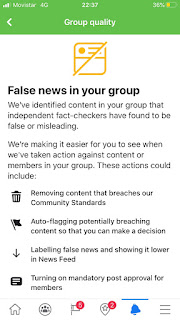 All scientist reviewers – except for one who did not provide references at all – referred to an article led by one of us: Steffen and co-workers (2018) Trajectories of the Earth System in the Anthropocene1. It appears that the reviewers correctly identified the source of Franzen’s “point of no return”. The article in question hypothesizes the existence of mutually reinforcing tipping points, or positive feedback mechanisms, in the earth’s climate system. It does not provide definite proof of the existence of such a “tipping cascade”, nor does it say they will all suddenly happen when 2°C of warming is reached, but rather sketches out a plausible scenario. It also provides estimates for the degree of warming required for tipping to be triggered. “Tipping” here means irreversible changes that a return to a lower degree of warming will not be able to stop – or “point of no return”. According to our understanding, the following tipping elements might be affected at 2°C of warming: