One story we have heard from many environmentalists over decades has been that we must be hopeful, no matter how bad the news on our planet becomes. That story says we must avoid predictions of catastrophe, or we will produce upset and apathy. It is a view we hear today from some climate scientists who question or even admonish their colleagues and others for suggesting it is now too late to avert dangerous climate change.

Most of these conversations occur without reference to any analysis or data - as if it is common sense and the field of social psychology did not exist. Research in that field offers a range of perspectives, including how a sense that climate change is a current calamity can increase engagement (1). One of your authors has summarised some of the relevant theories and ideas that suggest people are not necessarily  more motivated by stories of material hopes (read here on denial, here on taboo emotions, and here on non-material hopes). But our intention with this article is to contribute to this discussion with data from our work with people who anticipate that their own societies will collapse due to impacts from, or made worse by, climate chaos.

First, we will summarise some data from surveys of participants in the networks and initiatives of the Deep Adaptation Forum. Second we will quote from some of the key figures at the centre of the Extinction Rebellion campaign group. Our data suggests that many people are transformed by their acceptance that near-term societal collapse is either likely or inevitable, and with the right support can engage in more, not less, pro-social behaviour. This is only preliminary data, but we hope that it will better inform future discussions about the merit and means of communicating information on the worst case scenarios.

Two surveys were shared with over 10,000 international participants in the various online networks of the Deep Adaptation Forum. The first survey closed in February 2020 (2) and the second survey (which was conducted by the University of Cumbria) closed in May 2020 (3). In total, there were 275 responses. The quantitative data indicates that participants in the DAF who answered the survey are experiencing a greater sense of engagement and contribution to society because of their participation. For instance, in a question about emotions, which did not require participants to choose any option, 73.2% of respondents declared themselves to be “less isolated” thanks to their participation on DAF platforms. 53% reported that they were more curious, compared to 2.4% reporting being less curious. 22.3% reported that they were less apathetic, compared to 2% reporting being more apathetic (the raw data is shown in the Figures 1 and 2 at the end of this article). Here are some of the responses provided:

“My sense of connection to like-minded people has deepened immensely. I no longer take anti-depressants because I no longer feel alone and near-despair in this work."

"Through my involvement with the network my faith in humanity is being restored - this is a powerful learning & enables me to contribute in meaningful ways to my community and communities of interest."

"Professionally, it has driven a keen sense of purpose into my choices of where to put my professional skills and time."

"My willingness to keep engaging would have waned (if not collapsed) without the deep connections I found.. I feel much less isolated and alone and, after almost 40 years at the front line of fighting for Gaia, my exhaustion & frustration is much relieved."

There are many ways of being active in seeking to reduce harm in the face of climate-driven disruption to societies. In the first survey 43.6% reported finding their participation to be useful in their professional life. In the second survey, participants were asked about where they witnessed leadership. The responses are summarised in Figure 3. 60% of respondents considered that volunteers for Deep Adaptation are leading, which was far higher than staff in organisations. In addition, almost half respondents consider that they themselves are taking acts of leadership, once again higher than staff in organisations. These views are consistent with the idea that engaging in Deep Adaptation motivates people to act beyond their normal jobs. A qualitative review of their actions from the first survey (too numerous to list here), indicates that these are diverse pro-social behaviours, ranging from volunteering to leading meditation classes at schools to engaging the police in community dialogues about disaster readiness.

Figure 3: Where leadership is observed by people engaged in Deep Adaptation 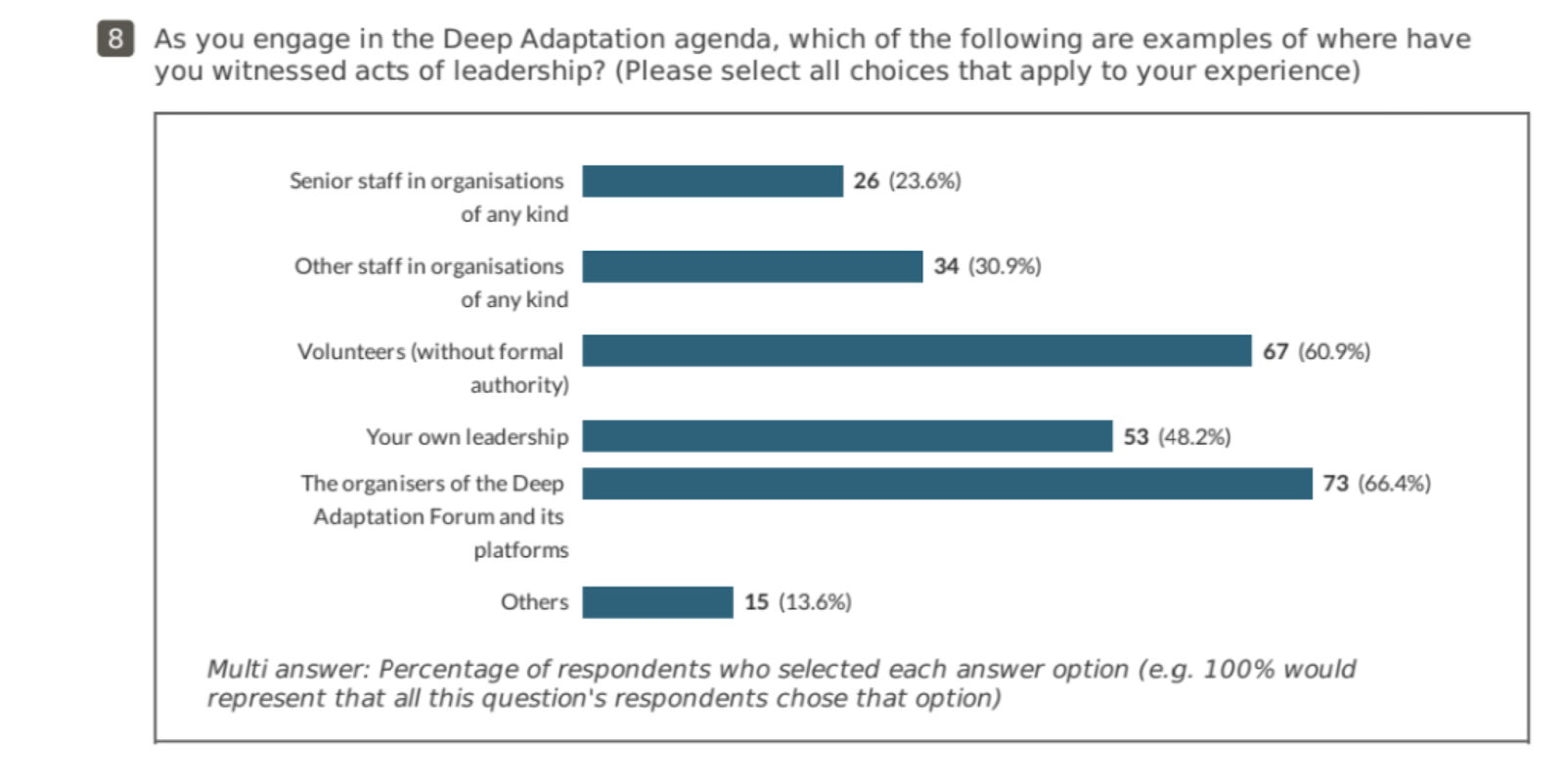 This perspective on leadership reflects what an esteemed scholar of leadership studies recently wrote about types of leadership for adaptation. For the International Leadership Association, Professor Jonathan Gosling writes: “Leadership of adaptation is diverse and sometimes hardly recognisable as leadership. It may be found in counter-cultural experiments, in some protest and some policing, and often persistent and undemonstrative in the sustaining institutions of society (schools, churches, professions etc.). It helps us reconcile with the situation, measure the appreciation of risks, grieve when we suffer loss, weigh discretion when our options seem narrowed, and to choose pragmatic and courageous change.”

Some reporters and commentators on climate activism may not understand the sentiments of activists, and assume that climate activists would not share the view that it is too late to prevent dangerous climate change. This would be a false assumption. As 39.9% of respondents to the first survey reported finding participation in DA networks to be useful in their political activism, we can deduce that many people who hold the perspective of anticipating societal collapse are politically active. That confirms our own experience with engaging with activist groups. Some of the people at the heart of Extinction Rebellion provided on-the-record statements about the impact of the original Deep Adaptation paper, in response to an enquiry from the BBC. To conclude this blog we will quote from them directly.

Andrew Medhurst, XR Finance Director, email to BBC Feb 28tb 2020: Jem's paper challenged my why (which in late 2018 was working for a pension company) and the emergence of Extinction Rebellion gave me a new and wonderful one. DA has been a lens through which I more clearly see the world and to act accordingly, motivating me from a position of simply being a helpless bystander. Giving up? No chance!
Rupert Read, XR Spokesperson, email to BBC Feb 28th: 2020: For me, the importance of the DA agenda is that it is about how we prepare for that possibility/probability, of collapse. Which is something that we must now do. Preparing is something active - it is the antithesis of 'giving up'. Furthermore, the very act of preparing - individually, psychologically, as a community, as a society - for possible societal collapse makes the possibility so much more real to one. And thus it can be a massive motivator for radical action, to try to head off that collapse, or at least to soften our crash-landing. This is why DA has motivated many to join XR... The antithesis of 'giving up'.
Gail Bradbrook, XR Co-founder, email to BBC Feb 28th 2020: Jem’s paper has been deeply influential across XR and that’s not to say everyone is in agreement with the conclusion of anything of inevitability… some may prefer a term such as extremely likely.
Sarah Lunnon, XR Political Circle, email to BBC Feb 28th 2020. A bit late to this party, having spent the day in the rain with Bristol Youth Strike for the Climate and my 14 year old daughter. My experience after reading DA in June 2018 was to reassess my involvement in traditional politics and the value I place on my relationships with those I love. To reassess from a position of realism, of having turned around and faced the 'dark mountain' of the risk we face and the actions we need to take. My focus has shifted, my activism increased, I accept that change is coming, I accept much of what we cherish may be lost, however the future is not yet set and as Gail notes above, by acting we strive to make it less bad.

Only time will tell us whether awakening to common vulnerability in the face of climate chaos will lead more people to respond in pro-social rather than anti-social ways. The evidence from these studies means that any hypothesis that anticipating societal collapse does not reduce apathy or motivate pro-social behaviour can be rejected. In some cases, engaging in Deep Adaptation is motivating new pro-social behaviours. The Deep Adaptation Forum exists to invite more people to explore how to embody and enable loving responses to our predicament. If scientists choose to hide their worst fears from the public, we wonder whether this will reduce the time people have to process their emotions and find positive ways of responding. Indeed, members of the Climate Psychology Alliance recently wrote a letter to the Guardian in support of those climate scientists who have stated that it is now too late to stop dangerous climate change and so while our efforts at cutting and drawing down carbon must be far bolder, a focus on adaptation must now be a central concern.

Like the CPA, volunteers in the Deep Adaptation Forum are aware that many people can experience difficult emotions when faced with news of calamity of any kind. Therefore, we encourage everyone involved to share information on how to look after ourselves if experiencing difficult emotions.

Do you work on either social psychology or communications? Are you interested in how best to support dialogue on the worst case scenarios that might lead to pro-social behaviour? If so, please consider joining the Holistic Approaches and Guidance discussion group here, at the Deep Adaptation Forum. Are you a researcher who could help us publish the full data set in a relevant journal? Please contact Dorian Cave (here).

The full report of the first survey can be obtained here. 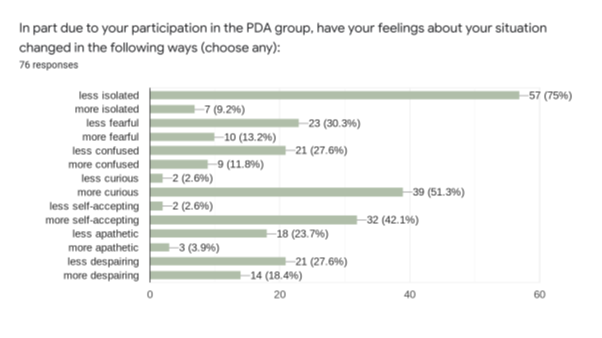 Figure 2: From the DA Professions’ Network 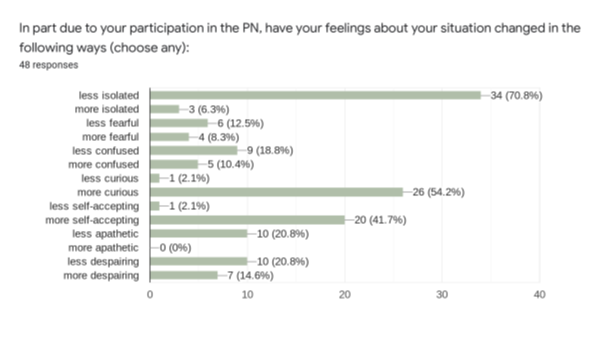